Arizona State University’s reimagined architecture program has welcomed its largest first-year class — 330 students, who are part of an innovative new way of teaching one of the most rigorous disciplines.

“We’ve rewritten the undergraduate course in architecture to be completely inclusive,” said Catherine Spellman, professor of architecture and associate director of The Design School in the Herberger Institute for Design and the Arts.

“It used to be that we had room for 45 students in the second year going forward, but we’ve rewritten the undergraduate BSD in architectural studies to accept everyone who has a 3.0 grade point average.”

Previously, the program would have about 200 first-year students. Spellman said the process of cutting down the cohort to 45 students was “heart-breaking.”

“This is a plan to keep them instead of sending them away.” 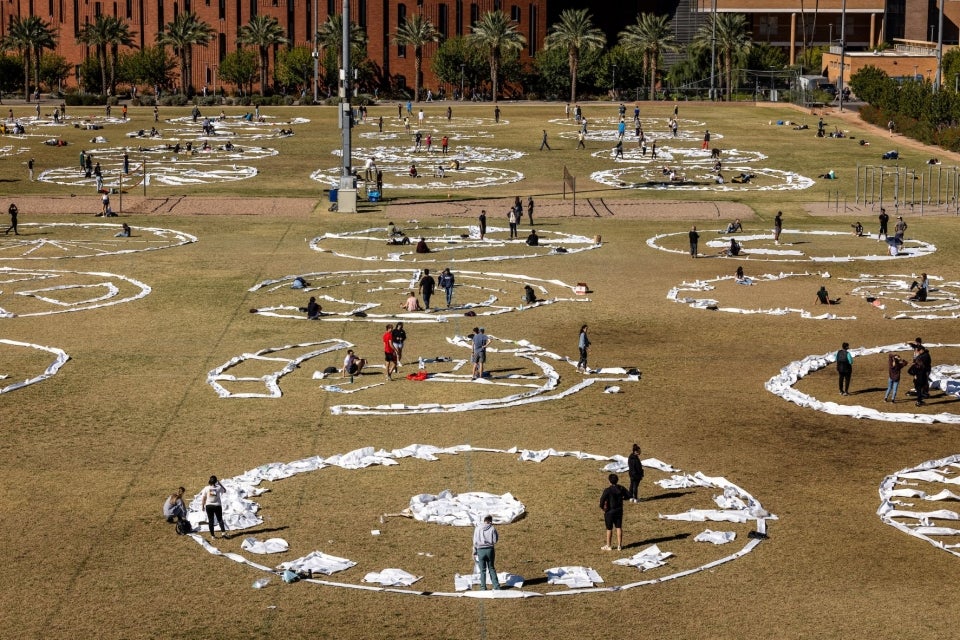 Last week, the students in the Architecture 101 studio course took over the Intramural Field on the Tempe campus with a collaborative project based on circles. They were assigned to review a real structure, ancient or contemporary, that’s round, and told to redesign it in a computer program. Then they created 50-foot-wide designs on butcher paper and laid them on the field. 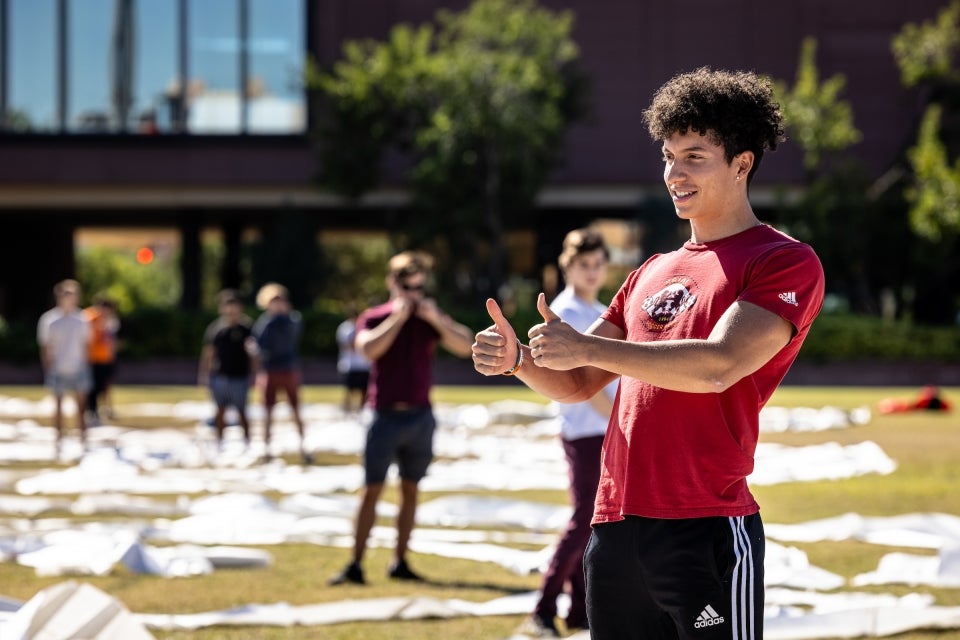 The “buildings” represent outdoor pavilions in a sculpture garden. After creating their designs with the paper on the field, the students “became” the sculptures, including student José Nuñez (shown above). 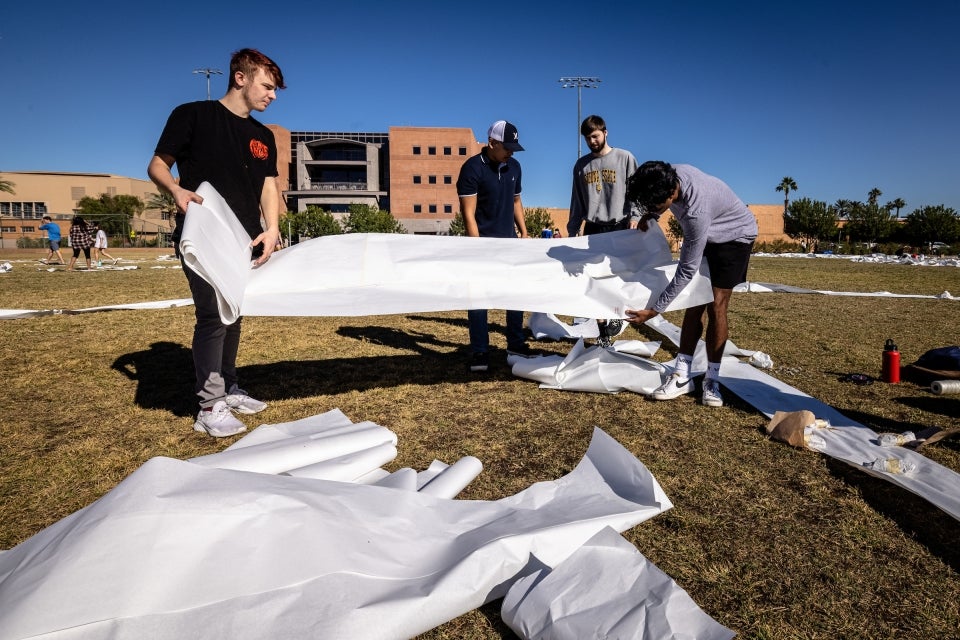 Students Cameron Pfaff, Francisco Valenzuela, Zach Warmiak and Aryan Kashyap (above, from left), and their classmates, learned how to collaborate, organize a project and deal with on-site issues, like wind.

Spellman said that with so many students, the first-year course had to be taught in a new way. She co-teaches with Elena Rocchi, clinical associate professor, and Felipe Mesa Rico, assistant professor. The three professors give lectures and also work closely with the teaching assistants, who are Master of Architecture students.

The semester is divided into three modules, and each has a group project. The circles were the project for the second module. 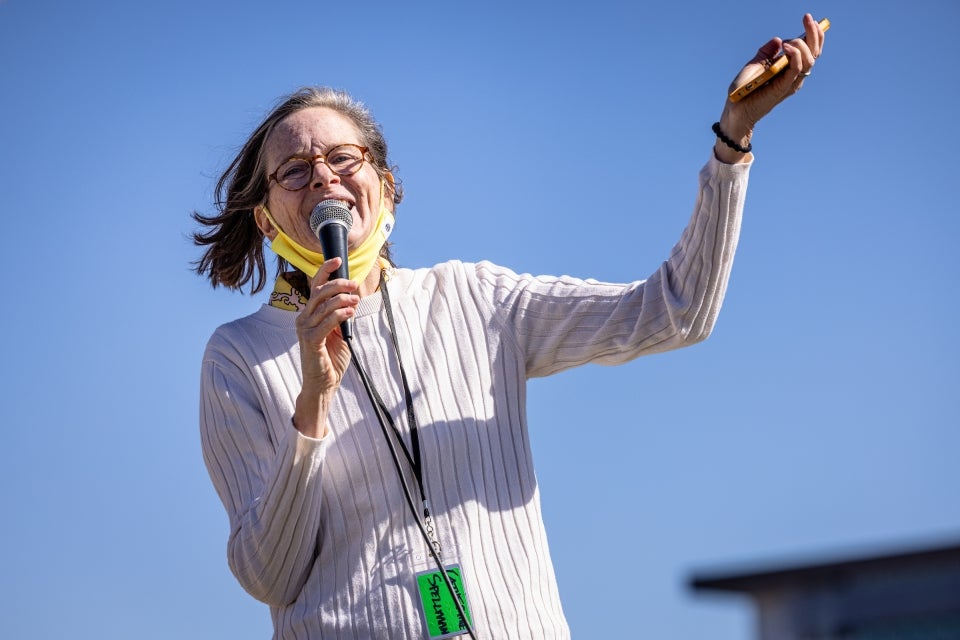 “What we’re trying to emphasize is that this is what we do as architects,” said Spellman (shown above).

“Architecture is often taught where every student does their own thing from the start to the end, and that is not how we practice. It’s not how you do anything in architecture.

“You get out to the site and you deal with it.” 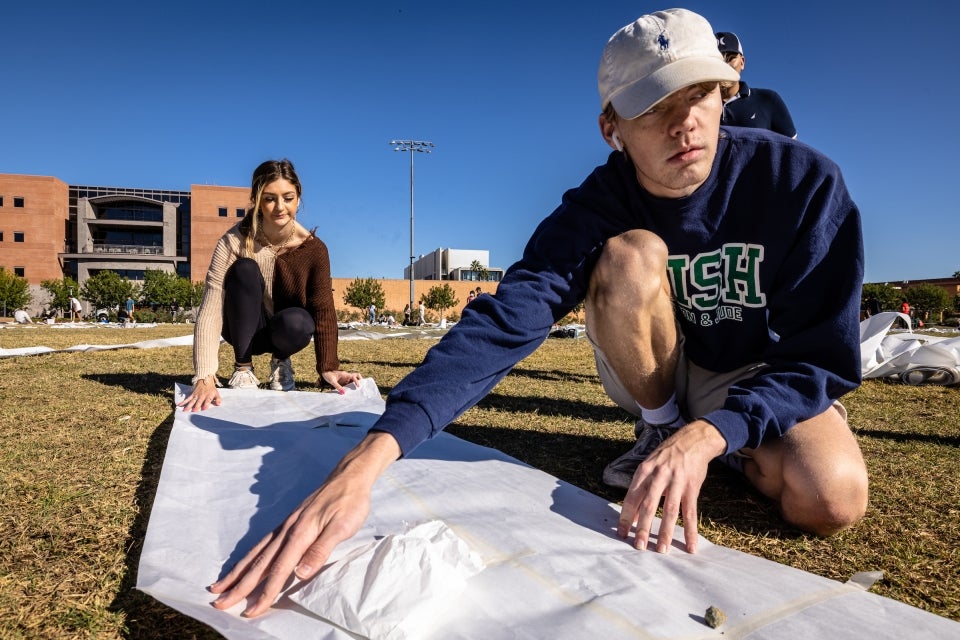 Students Ashlyn Anderson (left) and Wesley Chrisman wait for stones to keep their project from blowing away.

Paola Sanguinetti, an architect and the new director of The Design School, said that having beginning architecture students learn how to connect to a site is a pioneering way to teach the discipline.

“They think about wind loads and scale and gravity in a very experiential way,” she said as she watched the students on the field.

“They will carry this with everything else they do. This is completely innovative and transformational.”

Student Andrea Yazzie was pleased because her team used the design she created. She is a transfer student from Glendale Community College, where she earned a degree in computer assisted design technology.

“It came out pretty good and we managed it as a team,” she said as she sat in the middle of her group’s circle with an umbrella to shield her from the sun. She said that during the semester, the class has dealt with heat and wind while working on projects outdoors on campus.

“That definitely builds character for all of us.” 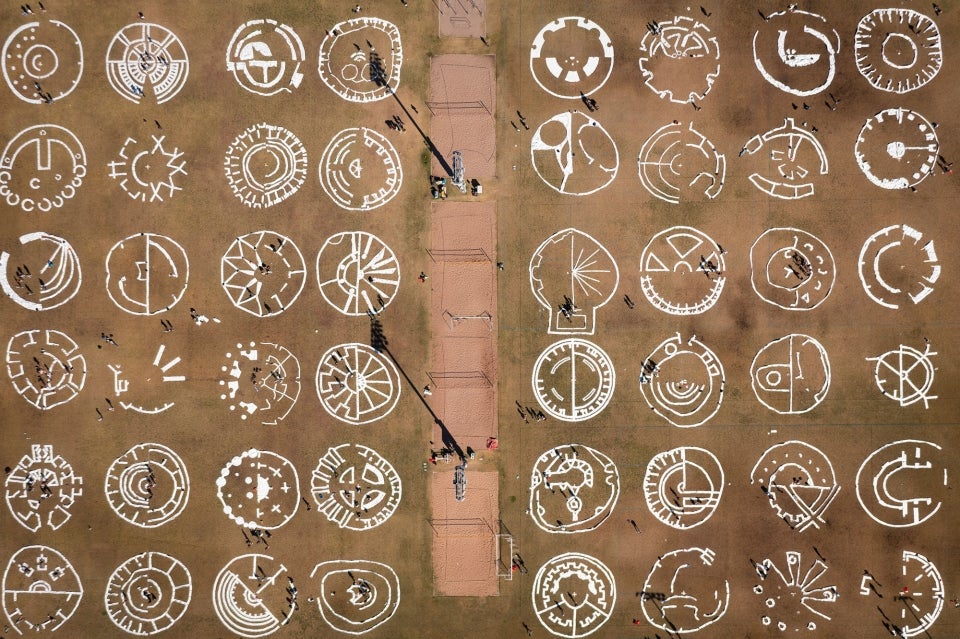